Posted on April 21, 2011 by versaillesgossip, before and after Francis Ponge 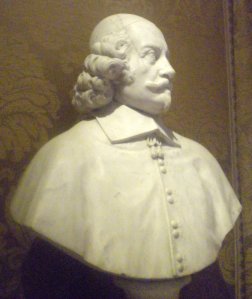 “Had he lived any longer, I don’t know what I’d do,” the twenty-one-year-old Louis XIV was reported to say upon the death of his Prime Minister and mentor, Cardinal Mazarin. Cardinal’s death made certainly an event in history. As for his life, it  was so eventful that his personality is almost lost among the noise of Parisian mob and the clamor of weapons. This Machiavellian mind, erudite and libertine, was more often revealed in the reaction of others. The immense fortune that the cardinal had accumulated during the times of trouble and which Louis XIV refused to inherit went to Duke of Mazarin who, overwhelmed by the preponderance of erotica in the art collection of the ecclesiastic, attacked the statues with the hammer.

The author of the blogs Versailles Gossip and Before and After Francis Ponge, Vadim Bystritski lives and teaches in Brest France. The the three main themes of his literary endeavours are humor, the French Prose Poetry, the French XVII and XVIII Century Art and History. His writings and occasionally art has been published in a number of ezines (Eratio, Out of Nothing, Scars TV, etc). He also contributes to Pinterest where he comments on the artifiacts from the Louvre and other collections. Some of his shorter texts are in Spanish, Russian and French.
View all posts by versaillesgossip, before and after Francis Ponge →
This entry was posted in Louis XIV, Mazarin. Bookmark the permalink.