Women, After They Have Been Dumped, Look Better Than When They Are In Love.

Posted on June 21, 2011 by versaillesgossip, before and after Francis Ponge

The solitude makes everyone look better.

Versailles of Maurice Barres is its park, the cathedral of dead leaves whose long organ pipes sway and moan with the wind. 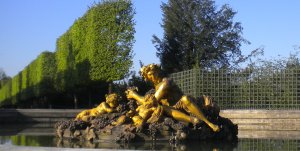 The whisper of its chorus — leaves entangled like the forty thousand wet female bodies marching onto Versailles in August.

In the distance Louis XVI reaches out to them, hands full of hunting trophies.

The moon performs celestial strip-tease. In the pool of black water pops up a yellow island.

The author of the blogs Versailles Gossip and Before and After Francis Ponge, Vadim Bystritski lives and teaches in Brest France. The the three main themes of his literary endeavours are humor, the French Prose Poetry, the French XVII and XVIII Century Art and History. His writings and occasionally art has been published in a number of ezines (Eratio, Out of Nothing, Scars TV, etc). He also contributes to Pinterest where he comments on the artifiacts from the Louvre and other collections. Some of his shorter texts are in Spanish, Russian and French.
View all posts by versaillesgossip, before and after Francis Ponge →
This entry was posted in Chateau Versailles, Chateau Versailles In Literature. Bookmark the permalink.