Posted on August 10, 2011 by versaillesgossip, before and after Francis Ponge 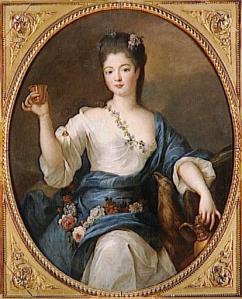 None of his women left their name in history. He preferred it this way — a quick conversation, then a date, then another quick conversation. Madame Parabere was an exception. They called her the Orgy Queen. She could and usually did drink all the Duke’s guests under the table, smiling to the last man standing. As for her favors, only her husband was receiving none; but then he was never invited. Duke liked Parabere a lot, but eventually replaced her. When asked by Saint-Simon about the reason for their fall out, he sighed and said, “She cheated on me,” then looked away and added, “if you can call it this way.” (Continued-2), (Continued-3), (Continued-4), (Continued-5) 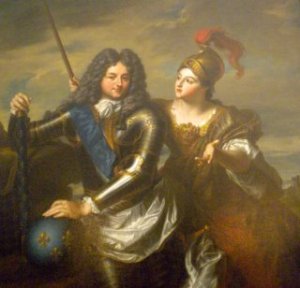 This picture,  Regent Advised By Minerva, which you can see in Dauphin’s quarters at the Chateau Versailles,  offers us one of the rare portraits of Countess Parabere. Its painter is Jean-Louis François du Rieu du Fargis.

The author of the blogs Versailles Gossip and Before and After Francis Ponge, Vadim Bystritski lives and teaches in Brest France. The the three main themes of his literary endeavours are humor, the French Prose Poetry, the French XVII and XVIII Century Art and History. His writings and occasionally art has been published in a number of ezines (Eratio, Out of Nothing, Scars TV, etc). He also contributes to Pinterest where he comments on the artifiacts from the Louvre and other collections. Some of his shorter texts are in Spanish, Russian and French.
View all posts by versaillesgossip, before and after Francis Ponge →
This entry was posted in Chateau Versailles, Duke of Orleans, Libertines, Regency and tagged Madame Parabere, Regent Duke d'Orleans. Bookmark the permalink.