… the moon over the shoulders of mountains, executioner scratching his back with an ax…

Posted on August 22, 2011 by versaillesgossip, before and after Francis Ponge 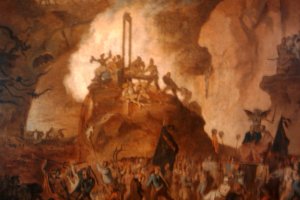 The cattle wouldn’t go anywhere near the Revolution Square, today’s Place de la Concorde: 2 625 people, butchered on the same spot, have saturated the ground with blood. The team of five executioners (Charles-Henry Sanson, 53 years old, sons et al) worked non-stop, dispatching in less than 3 minutes a couple of people. The paperwork and the transport from Conciergerie to the guillotine took most of their time.

Nationally the days of Terror are accountable for 16 600 lives. In Versailles Louis-Cyr-Charlemagne Sanson, the brother of Charles-Henry Sanson, died from stress at the Queen’s Stables(1). His replacement on the scaffolds, Louis Dupuy, showed a more compassionate countenance, mostly due to his unattended hernia and a complete absence of workman’s compensation for those injured on the job.

In the end a complete amateur, Jean Boursier, was put in charge of the local death machine. The contraption being exceedingly simple, no special training was required for its operation. In Paris Charles-Henry Sanson allowed the youngest in his family to do the release of the blade. Perhaps this is why Louis XVI’s head was sliced from the occiput to the maxilla, leaving the lower jaw attached to the neck. 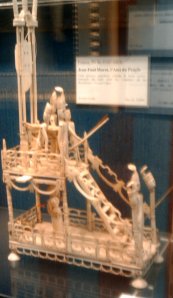 See also on the subject of Toys of the Revolution

(1) During the Revolution the Queen’s Stables are converted into a prison.

The author of the blogs Versailles Gossip and Before and After Francis Ponge, Vadim Bystritski lives and teaches in Brest France. The the three main themes of his literary endeavours are humor, the French Prose Poetry, the French XVII and XVIII Century Art and History. His writings and occasionally art has been published in a number of ezines (Eratio, Out of Nothing, Scars TV, etc). He also contributes to Pinterest where he comments on the artifiacts from the Louvre and other collections. Some of his shorter texts are in Spanish, Russian and French.
View all posts by versaillesgossip, before and after Francis Ponge →
This entry was posted in Louis XVI, Marquis de Sade at Versailles, The French Revolution, The Queen's Stables at Versailles, Toy Guillotine, Toy Severed head of Louis XVI, Toys of Revolution, Uncategorized, Versailles Theater. Bookmark the permalink.