Casanova or the Ambulant Bordello

Posted on November 29, 2011 by versaillesgossip, before and after Francis Ponge 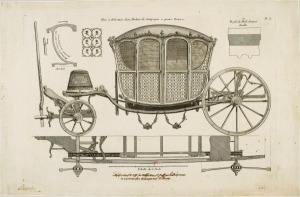 From 1734 till 1797 Casanova had covered over 67000 km in his carriage, visiting most of the European countries. He was exiled from some, imprisoned in the others, staying nowhere for more than a year. And it is perhaps for this reason that so many of his sexual adventures take place on the road. A sex adventure in a moving vehicle is not at all uncommon in the XVIII century. Philiber Joseph Leroutx 1786 Dictionary informs us that a slang expressions for fiacre, the carriage for hire, was precisely the ambulant bordello. The Dictionary explains that when on the move most of those vehicles made enough noise to cover whatever ruckus activity was taking place on the inside. Later on the expression has attached itself to a promiscuous person, as much a prostitutes as her clientele.

The author of the blogs Versailles Gossip and Before and After Francis Ponge, Vadim Bystritski lives and teaches in Brest France. The the three main themes of his literary endeavours are humor, the French Prose Poetry, the French XVII and XVIII Century Art and History. His writings and occasionally art has been published in a number of ezines (Eratio, Out of Nothing, Scars TV, etc). He also contributes to Pinterest where he comments on the artifiacts from the Louvre and other collections. Some of his shorter texts are in Spanish, Russian and French.
View all posts by versaillesgossip, before and after Francis Ponge →
This entry was posted in Casanova, Libertines and tagged Casanova. Bookmark the permalink.