Posted on December 23, 2011 by versaillesgossip, before and after Francis Ponge 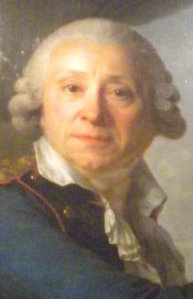 Hoping to receive a reward, he reports a non-existent conspiracy against Madam Pompadour. Unfortunately the police takes him too seriously, for his story is complete with a real booby-trap and explosives; and so when nothing is uncovered behind  his elaborate narrative, Latude ends up thrown into the Bastilles. He attempts many escapes but is inevitably re-captured and serves his term till the days of Marie-Antoinette whom he successfully petitions both for the amnesty and pension. The French Revolution is another occasion for fame and another pension. His memoirs, co-authored with Thiery, are a turn of the century best-seller. The day the Bastille is taken, he recovers there the ladder he has made for his 1755 escape and presents it to the City of Paris. Later on the ladder finds its way to the Museum of Carnavalet where you can still see it today.

The author of the blogs Versailles Gossip and Before and After Francis Ponge, Vadim Bystritski lives and teaches in Brest France. The the three main themes of his literary endeavours are humor, the French Prose Poetry, the French XVII and XVIII Century Art and History. His writings and occasionally art has been published in a number of ezines (Eratio, Out of Nothing, Scars TV, etc). He also contributes to Pinterest where he comments on the artifiacts from the Louvre and other collections. Some of his shorter texts are in Spanish, Russian and French.
View all posts by versaillesgossip, before and after Francis Ponge →
This entry was posted in French Revolution, Madam Pompadour, Marie-Antoinette. Bookmark the permalink.