Libertines and the Louisiana Bubble

Posted on December 23, 2011 by versaillesgossip, before and after Francis Ponge

In 1715 he is accepted as an economic adviser to Duke of Orleans. The country is living through the toughest stagnation due to the lack of gold bullion. He suggests a creation of the French National Bank, the issuing of the paper currency, all backed up by the real estate in the New Word! For five years his ideas revolutionize all of Europe, then follows inflation, the loss of confidence in the new system, the run on his bank, the exile.

The working relationship of John Law and Phillip d’Orleans (1) raises the following question, What does promiscuity tell us about basic economic principles? Perhaps to ask this is as preposterous as to claim a connection between some of the physical and moral deformities. On the other hand maybe not! The most-libertine prince and the creator of the first speculation bubble did find some correspondences between the body economic and the body physical. As for the deformities, the following anecdote happened to be in circulation in the days when the John Law system has reached its apogee: In the newly organized trading area a certain hunchback had made a fortune renting out his hump to the speculators as a portable table to sign their deals.

Retrospectively the Louisiana Bubble burst strikes us as something quite inevitable: not too many Frenchmen wanted to leave for New Orleans, preferring trading speculation to the pioneer life-style. Indeed the newly established city did not compare favorably to the libertine Paris of the Regency. When the scarcity of women was brought to the Regent’s attention, the Duke decided to solve the problem by sending to America a shipload of the condemned French prostitutes; and so high was the demand on these girls in Louisiana, that the last of them, ugly as she was, had to be assigned by drawing of the lots. The woman was consequently nick-named Helen of the Good Will.

1) John Law was the Scottish economist pioneering the use of paper money in France; after the death of Louis XIV in 1715, the Regent, Philip of Orleans, was a de-facto ruler of the state, he implemented many of John Law’s economic ideas, paying off the national debt, but also plunging all of Europe into an economic crisis similar to the one we experience today; Louis XV was only five years old. 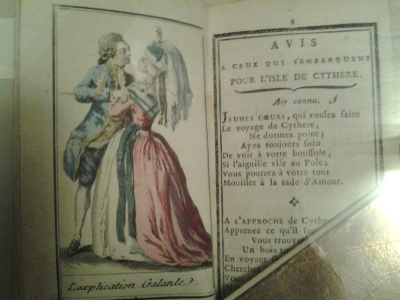 The author of the blogs Versailles Gossip and Before and After Francis Ponge, Vadim Bystritski lives and teaches in Brest France. The the three main themes of his literary endeavours are humor, the French Prose Poetry, the French XVII and XVIII Century Art and History. His writings and occasionally art has been published in a number of ezines (Eratio, Out of Nothing, Scars TV, etc). He also contributes to Pinterest where he comments on the artifiacts from the Louvre and other collections. Some of his shorter texts are in Spanish, Russian and French.
View all posts by versaillesgossip, before and after Francis Ponge →
This entry was posted in Libertines, Phillip d'Orleans, Regency. Bookmark the permalink.