The French Revolution and the Origins of Restaurants

Posted on November 15, 2012 by versaillesgossip, before and after Francis Ponge 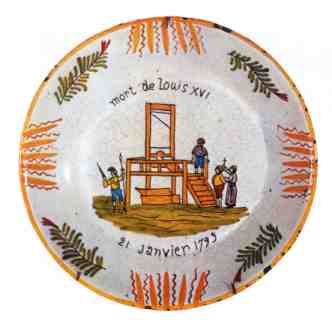 The restaurants as we know them today appeared in the first year of the French Revolution. The explanation is simple — most of the aristocrats had fled the country, while their unemployed cooks went into business for themselves. The most famous of these restorations, Méot, was ran by the cook of the Prince Condé. It is at Méot that the revolutionaries celebrated the execution of Marie-Antoinette with a banquet. The food and service were impeccable; but there were a few changes in presentation. In the previous years all of the food appeared simultaneously on the table; now the dishes replaced each other: the new powers-that-be very wisely decided not to flash their appetite. This new presentation was called à la russe. I hesitate to tell you why exactly my ex-patriots were brought into this as early as 1793; but by 1814 they were in Paris as an occupation force, and it is to their impatience with the French waiters that we owe the appearance of the first fast food restaurants called Bistros, after the Russian Быстро, быстро!

The author of the blogs Versailles Gossip and Before and After Francis Ponge, Vadim Bystritski lives and teaches in Brest France. The the three main themes of his literary endeavours are humor, the French Prose Poetry, the French XVII and XVIII Century Art and History. His writings and occasionally art has been published in a number of ezines (Eratio, Out of Nothing, Scars TV, etc). He also contributes to Pinterest where he comments on the artifiacts from the Louvre and other collections. Some of his shorter texts are in Spanish, Russian and French.
View all posts by versaillesgossip, before and after Francis Ponge →
This entry was posted in French Revolution, Louis XVI, Marie-Antoinette. Bookmark the permalink.