Life of a Princess

Posted on May 4, 2013 by versaillesgossip, before and after Francis Ponge

It is a little awkward, but I am yet to meet a boy who would like to be a prince — a fireman, a policeman, maybe even a gynecologist, anything but a prince; consequently, it is to the aspiring little princesses that I address this article written around the rhetorical question, “What does Her Highness actually do?”

Today I have an opportunity to glance at the household of Madame Elizabeth, the Louis XVI’s youngest sibling, “doomed” to celibacy in her domain due to an unfortunate shortage of eligible princes on the eve of the revolution, and since the sexuality of the big people is always a concern to the little ones, right off the bat I report that Madam Elizabeth was very close to her doctor with whom she undertook enough of charitable action in the neighboring villages to draw attention of the uncharitable historians. Charity is a truly princely passion — no surprise it appears as somewhat suspicious to those who have been raised in the pragmatic tradition of “What’s in it for me?” 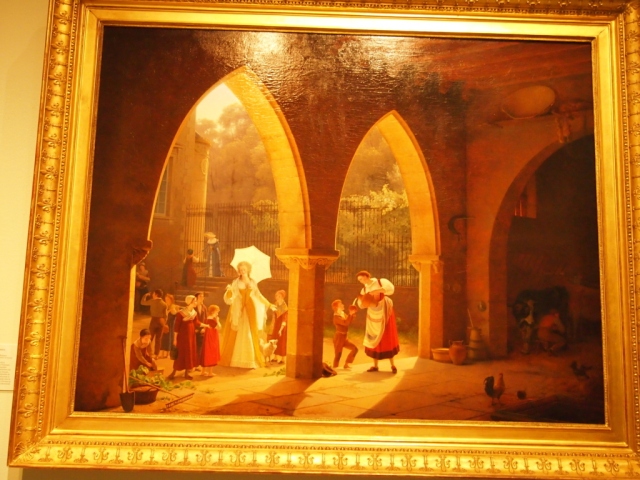 Here I stole a picture of a picture where Madame Elizabeth is distributing milk to orphans. A painting is not a paparazzi photo; therefore, the doctor is not included. What can we say looking at this painting? Cows are milked twice a day; thus, we should assume that charity takes place in the morning. So does hunting. Apparently the two activities are in conflict with each other, because Madam Elizabeth is an avid huntress. The painting below shows us Marie-Antoinette, Louis XVI and Madame Elizabeth on a hunting expedition. We see who is important there! It could also be that the picture is painted back when Madame Elizabeth was living at the Chateau Versailles, she could not move out and establish an independent household before the age of twenty-five. 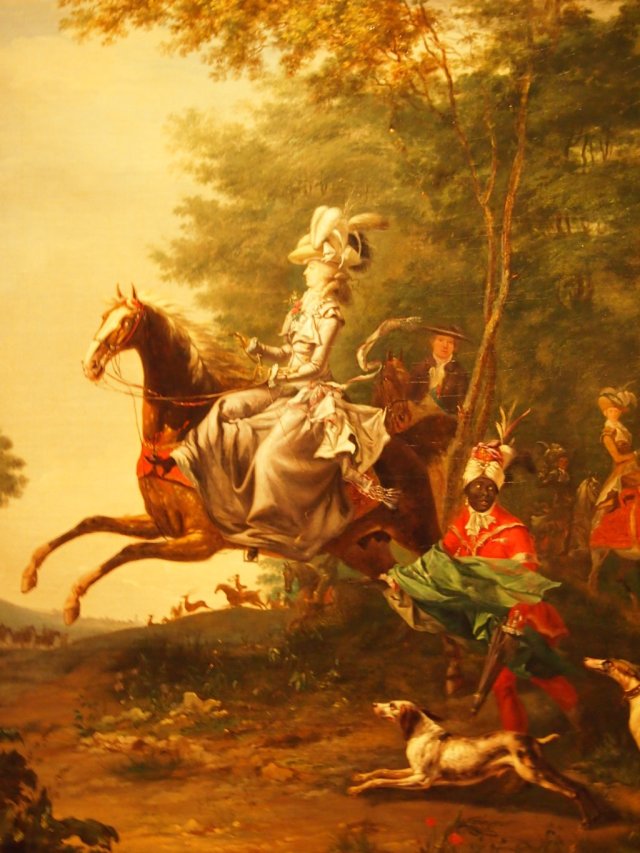 In the next painting our lovely princess is playing harp. She is actually vying with her sister-in-law for the authorship of the little sentimental composition called “Pauvre Jacques” (http://www.youtube.com/watch?v=8TEzABvO2Ss.) I will not hide from my reader that Marie-Antoinette is a published author of a good number of similar songs and “Pauvre Jacques” is commonly attributed to her. Personally I am more inclined to believe that behind Pauvre Jacques hides Count Fersen, conspicuous by his frequent absences, and not a local country doctor. Anyway, let us sing! “Pauvre Jacques, quand j’étais prés de toi, je ne sentais pas ma misère; mais à present, que tu vis loin de moi, je manque de tout sur la terre!”

Sad. And on top of that prophetic, for Madame Elizabeth had spent a portion of her life in captivity and was guillotined at the age of thirty. This chapter establishes her reputation as tragic princess; it also breaks the routine — gone, all gone the happy-go-lucky days of music and painting lessons, cards and tric-trac, long promenades in the English garden: in the course of two years of their captivity the ex-princess and the ex-queen wove together this wool carpet! It came to us in fragments and was stitched out of several pieces around 1815; but regardless of its provenance, if this is a real thing, or if some such carpet really existed, I am impressed — this is a lot of work! Now I should ask my plastic-tiara girls that last rhetorical question,” Do we still want the career of a princess?” 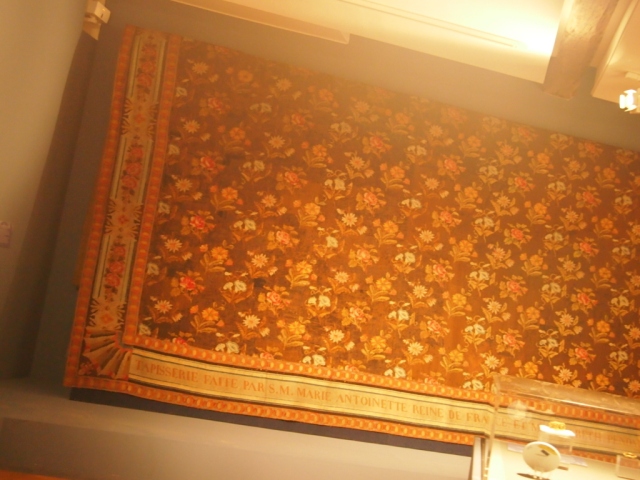 The author of the blogs Versailles Gossip and Before and After Francis Ponge, Vadim Bystritski lives and teaches in Brest France. The the three main themes of his literary endeavours are humor, the French Prose Poetry, the French XVII and XVIII Century Art and History. His writings and occasionally art has been published in a number of ezines (Eratio, Out of Nothing, Scars TV, etc). He also contributes to Pinterest where he comments on the artifiacts from the Louvre and other collections. Some of his shorter texts are in Spanish, Russian and French.
View all posts by versaillesgossip, before and after Francis Ponge →
This entry was posted in Axel de Fersen, Chateau Versailles, Court, Courtiers, Domain of Madame Elizabeth, French Revolution, Gardens and Park, Louis XVI, Marie-Antoinette, Versailles. Bookmark the permalink.

2 Responses to Life of a Princess