Posted on April 5, 2014 by versaillesgossip, before and after Francis Ponge 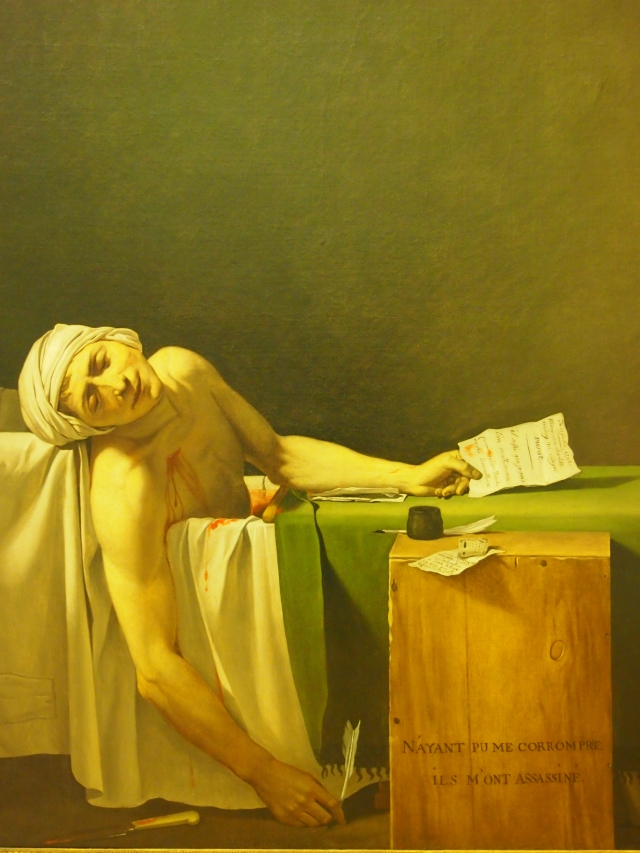 There are two opinions about copying. The first one sees all copies as inferior to the original; the second admits that a copy may be an improvement, or an inspiration for another original work. A good example there would be Madame de Recamier of David inspiring La Grande Odalisque of Ingres. The picture we see above is a copy, and an attempted improvement. When copying their teacher’s painting, David’s students turned the nightstand into a stele, by changing a simple dedication, “From David to Marat” into an epitaph, “Unable to corrupt, they murdered me.” This is the third text in the picture: the other two are above — a note from Charlotte Corday to Marat, and the note from Marat, ordering the banknote to be given to the poor. The two notes serve as written evidence, Marat is virtuous, and he is martyred. The head wrapped in the Renaissance turban, so uncomfortably resting on the shoulder, the spread-out arms, the limp  torso — Marat’s body recalls a long tradition of alter pieces, from crucifix to taking off the cross, and placing in the tomb; and still, the apparent focus is on the graphomaniac activity of Marat — the power of writing in our lives, and then of course, the futility of that effort: how do you fill the void with scribble? Apparently the students overplayed it, for like in the Portrait of Madame de Recamier, David’s intention was to maximize the void — not just a nightstand, the whole painting was supposed to be a stele, leaving plenty of room for further writing.

The author of the blogs Versailles Gossip and Before and After Francis Ponge, Vadim Bystritski lives and teaches in Brest France. The the three main themes of his literary endeavours are humor, the French Prose Poetry, the French XVII and XVIII Century Art and History. His writings and occasionally art has been published in a number of ezines (Eratio, Out of Nothing, Scars TV, etc). He also contributes to Pinterest where he comments on the artifiacts from the Louvre and other collections. Some of his shorter texts are in Spanish, Russian and French.
View all posts by versaillesgossip, before and after Francis Ponge →
This entry was posted in French Revolution, Louvre. Bookmark the permalink.