Posted on May 2, 2014 by versaillesgossip, before and after Francis Ponge 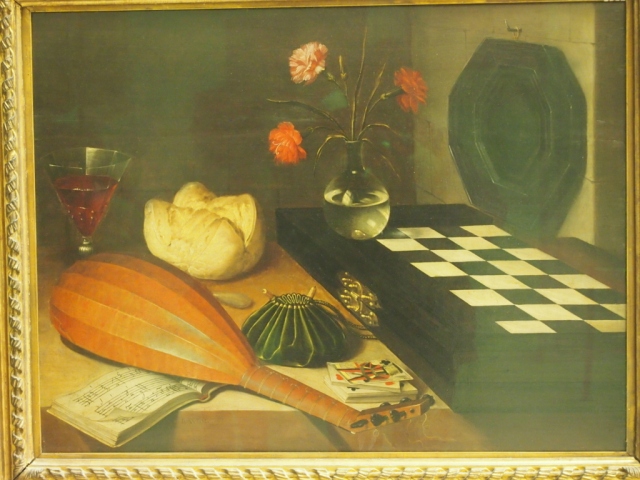 This anonymous XVII century still life can be seen in the Louvre collection of French paintings, right before Georges de La Tour. At first the picture passes for a familiar allegorical representation of our five senses: sight — book, hearing — lute, touch — cards, smell — flowers, taste — bread; but on second thought, you see that the economy of such interpretation is disturbed by the multitude of objects echoing each other’s meaning: imagine that one of us leafs through the book while playing music; he picks the strings, while the other shuffles the deck, the third counts out the money; two more people are moving thoughtfully chess pieces, then all share food and drink and all the earthly pleasures represented by the three carnations. Then again, you catch yourself thinking that we should smell and examine our wine before drinking it; and obviously water is the opposite of wine; so, you begin to suspect that a certain hierarchy of meaning governs the objects. Notice the pearl earring on the table and the dead mirror on the wall — a woman is involved! The absence of reflection suggests blindness, or some kind of a blind spot. How to see this deck of cards — the game of fortune, or its reading? Perhaps the Jack of clubs will loose his money in some affair that concerns his heart?

The author of the blogs Versailles Gossip and Before and After Francis Ponge, Vadim Bystritski lives and teaches in Brest France. The the three main themes of his literary endeavours are humor, the French Prose Poetry, the French XVII and XVIII Century Art and History. His writings and occasionally art has been published in a number of ezines (Eratio, Out of Nothing, Scars TV, etc). He also contributes to Pinterest where he comments on the artifiacts from the Louvre and other collections. Some of his shorter texts are in Spanish, Russian and French.
View all posts by versaillesgossip, before and after Francis Ponge →
This entry was posted in Louvre. Bookmark the permalink.