Posted on August 10, 2016 by versaillesgossip, before and after Francis Ponge

From one language to the other the most confusing subject to learn is prepositions: there are no correspondences between them. Is this why a quantity of ink was spilled over translating Virgil’s “tears for things?” I guess preposition could be at the heart of the problem. Although choosing between for and of seems like a strange issue: things do not really cry.

Nevertheless, there is an order of things, like Hallmark cards, that has a potential for touching various sentimental cords in our bosom, and therefore should merit an appelation of tearful, or capable of invoking sad thoughts. Undoubtedly, the French Revolution left in its wake such hot buttons that vie with antiquity for the emotional pool of those given to contemplation. A new unfathomable pool was created, stretching from sublime to ridiculous and back to sublime, which even the Romantic XIX century failed to drain. Tearful things were left for us to muse over, weighing thoughtfully prepositions, moving words on page, words about tears and their things. It’s not easy to find the right preposition there, especially when there is none. 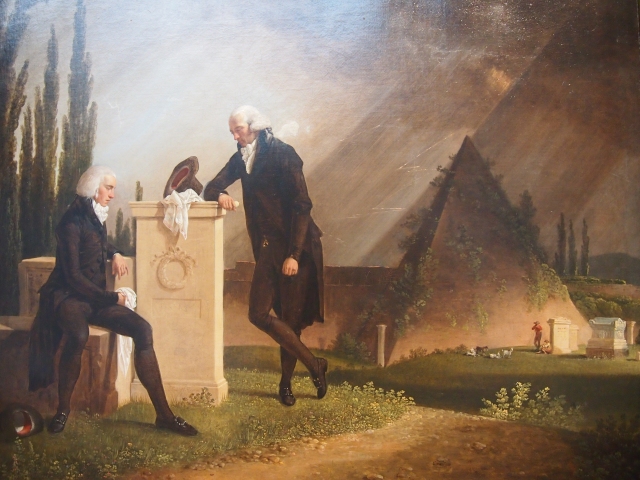 The author of the blogs Versailles Gossip and Before and After Francis Ponge, Vadim Bystritski lives and teaches in Brest France. The the three main themes of his literary endeavours are humor, the French Prose Poetry, the French XVII and XVIII Century Art and History. His writings and occasionally art has been published in a number of ezines (Eratio, Out of Nothing, Scars TV, etc). He also contributes to Pinterest where he comments on the artifiacts from the Louvre and other collections. Some of his shorter texts are in Spanish, Russian and French.
View all posts by versaillesgossip, before and after Francis Ponge →
This entry was posted in Uncategorized. Bookmark the permalink.