The Crown and its Mystery

Posted on June 21, 2015 by versaillesgossip, before and after Francis Ponge 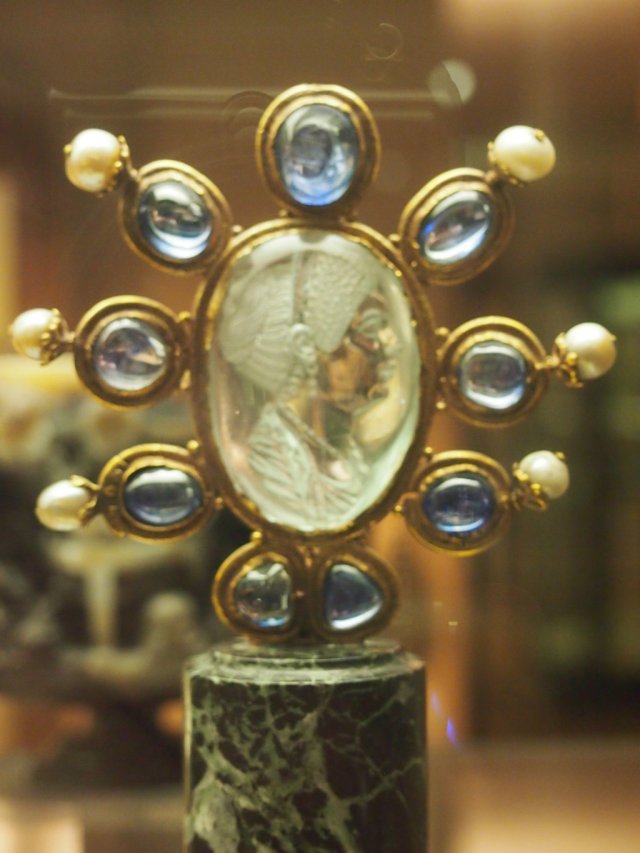 Medieval Western Europe was made out of three traditions: Classical, Judaic and Germanic, where Christianity served as a cement for what was there before and what came after. This large topaz was carved in antiquity and later framed by the Merovingian jewelers – precious stones were believed to have apotropaic qualities, warded off evil and were likely to end up in treasuries of famous cathedrals. 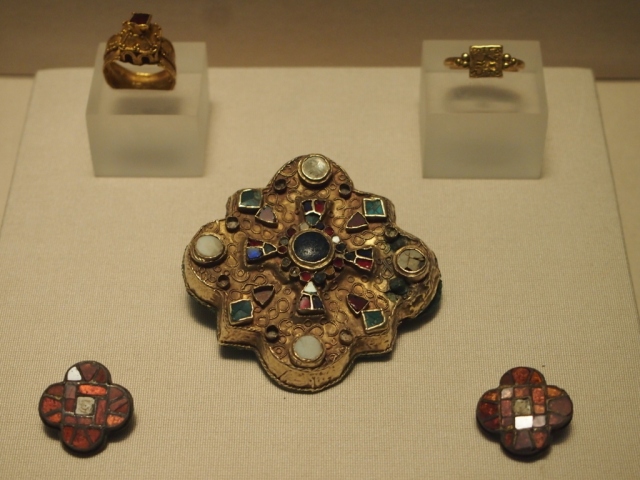 All Medieval jewelry had a meaning of talisman. The wedding ring, for example, was symbolically placed on three different fingers; this is why Eleanor of Aquitaine wore three of them on her right hand. 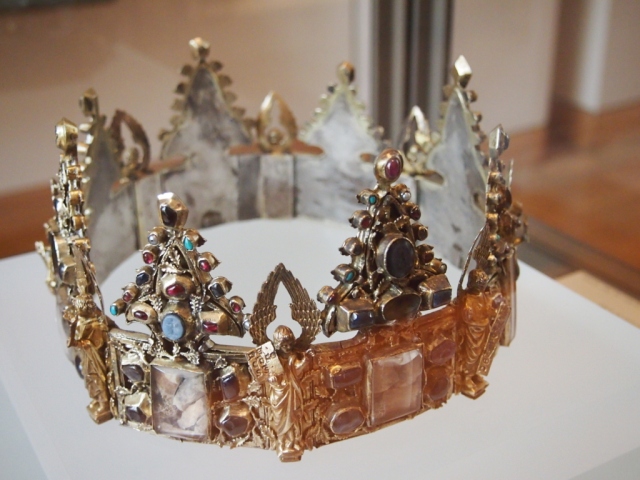 This crown displays all the properties of talisman: it is not just a victor’s wreath, the way it was understood in antiquity, but primarily a reliquary that is a repository of physical remains of holy men – their teeth, hair, nails, and pieces of bones, as well as various splinters, shreds and threads of coffins, crosses and shrouds, especially the much prized souvenir of war tourism, the True Cross from Golgotha. 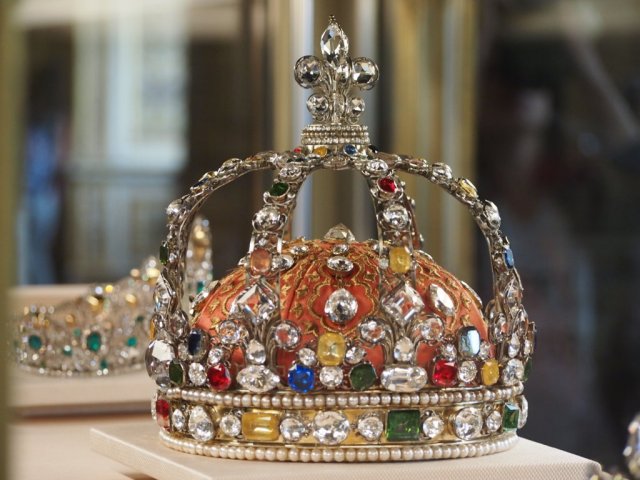 This crown, which is the crown of Louis XV, was also used as a repository of precious stones — the so called jewels of the crown. Right away we feel the ambiguity of expression, for the jewels of the crown means the jewels that belong to that frame on the day of coronation and are later pried out to be worn separately, as well as all the jewels of extraordinary value that happened to touch the royal person, and are of historical significance. All that is easy enough; however, there is the third meaning that can be challenging: Did you know that even to this day the French Republic doesn’t rule in its own right, but serves as a regent to the crown?

Posted on June 11, 2015 by versaillesgossip, before and after Francis Ponge

A couple of days ago Anish Kapoor invaded the historical park of Versailles; and the reaction of the press was as negative as it had ever been on such occasions. I think it was something he said about his installation on the Green Carpet of the central axle that provoked the journalists: the Queen’s Vagina! He didn’t have to spell it, it was enough to install it there. See the last picture in the series. 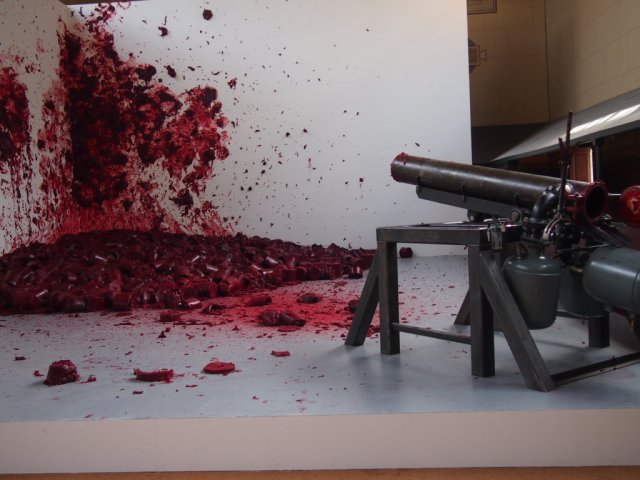 The first work I want to show you I find the best; and its location seems appropriate — the famous Tennis Court — the cradle of the French Revolution! There we find a platform with a cannon discharging buckets of red paint — its title is also not without sexual connotation — Shooting in the Corner. 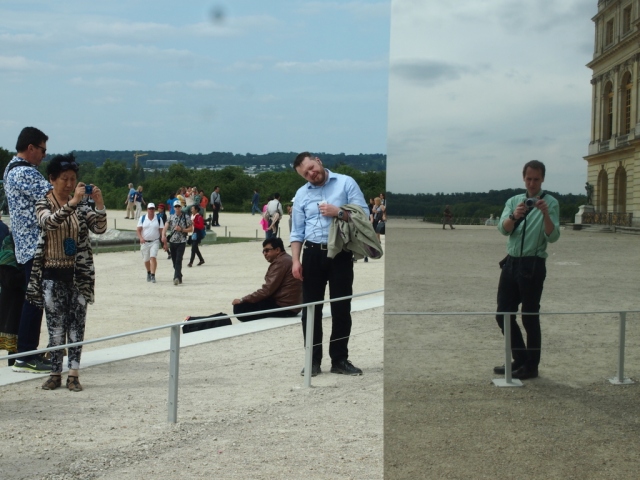 The second Anish Kapoor piece is on display right outside the Crystal Gallery, a convex-concave mirror — a giant selfie and a big success with tourists, one of its sides offers an upside-down image of the onlooker — the usual case with mirrors: the reflection is quite true, but somehow backwards. He should have kept the journalists at this location. 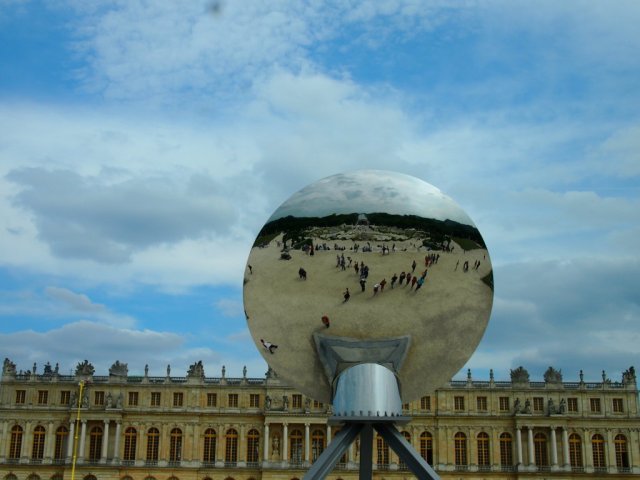 Then we see the second mirror at the viewpoint on the Grand Canal, which reminds me of the opening in The Snow Queen where Anderson describes demons flying this symbol of vanity toward God. I must say Anish Kapoor’s mirror is also very big, yet for all the distortions, not big enough for Versailles. 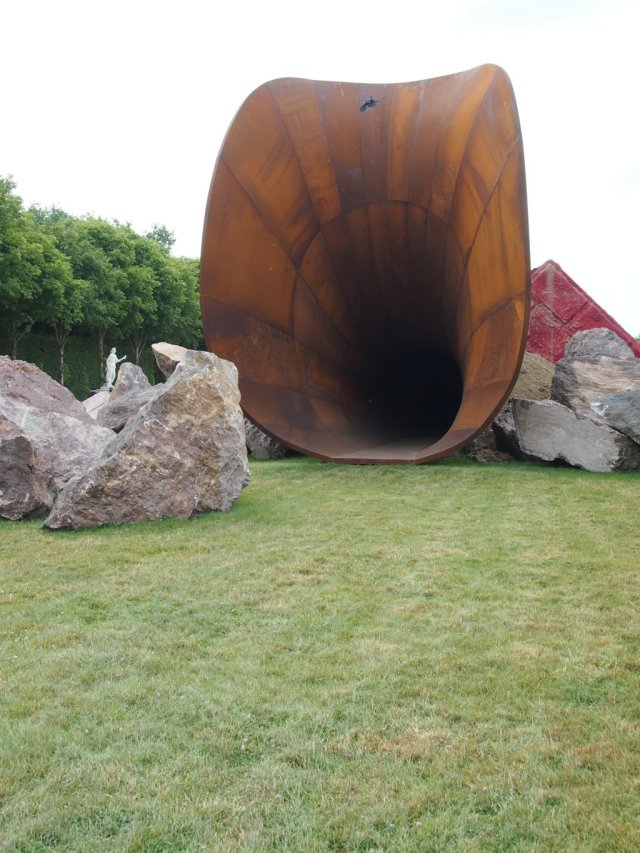 Posted on June 9, 2015 by versaillesgossip, before and after Francis Ponge 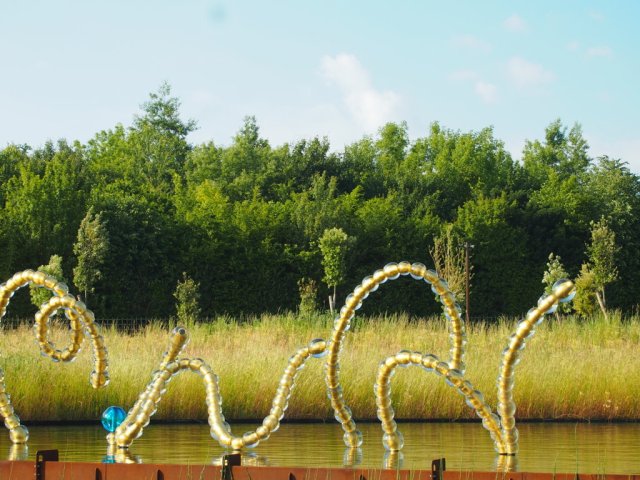 It is commonly believed that men lead in a dance; or at least generations of skillful female dancers gave us that impression; for in those dances where the sequence of steps is a bewildering multitude, men are commonly at a disadvantage — it was a woman who held the crib notes jotted down on her fan and surreptitiously suggested to her dancing partner which ones to take next. The fountain inaugurated last month in the gardens of Chateau Versailles pays tribute to those crib notes. 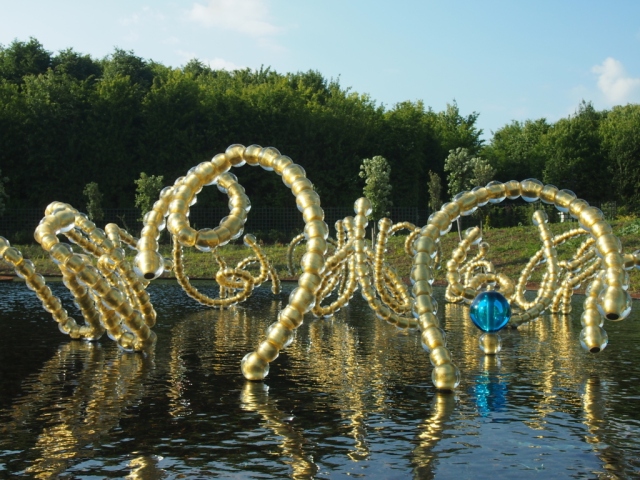 Perhaps I have spilled the beans too soon — erudite approach to an aesthetic object is so patronizing; but isn’t it how pundits dominate the first impression? I was caught on the horns of dilemma, trying to give this subject a charitable introduction, while staying true to my opinion; and what was my opinion, that first impression? 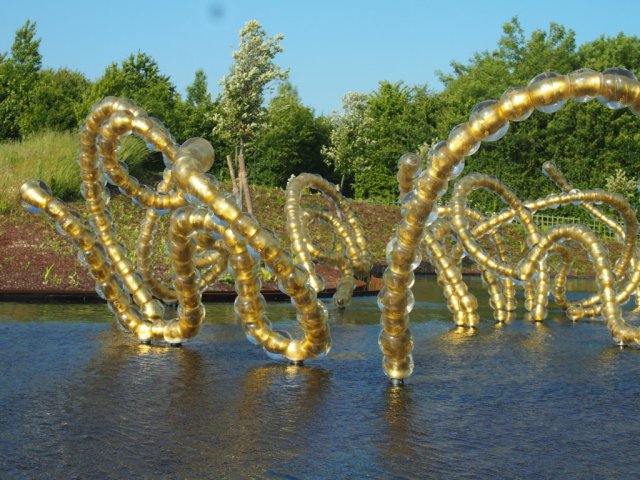 Entering the grove, I thought that the architect gave us his fanciest signature in the middle; and it had been preceded by plenty of squiggles in the margins,  as if trying out a new pen: first ones he didn’t like, and honestly neither did I.

Posted on April 9, 2015 by versaillesgossip, before and after Francis Ponge 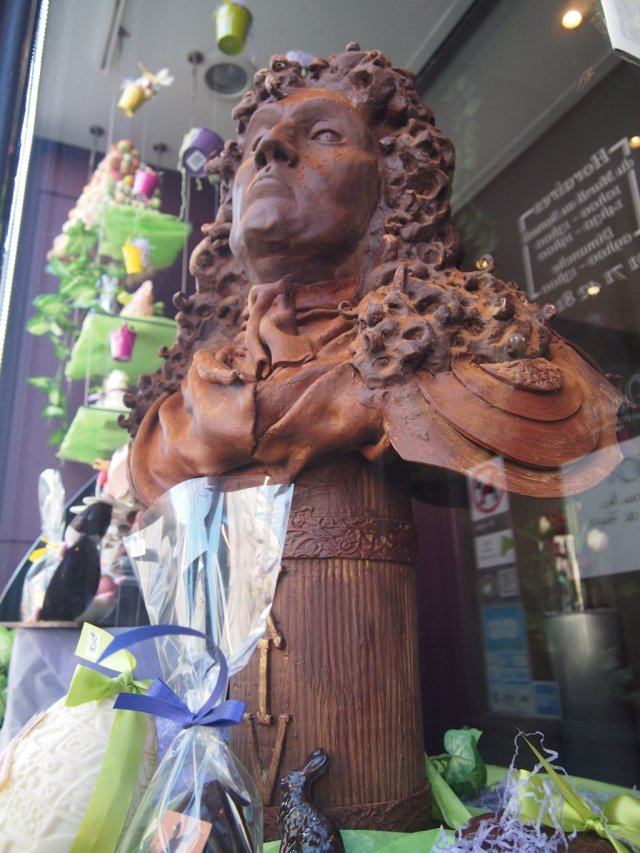 This chocolate portrait of Louis XIV decorates the shop window at 82 rue de la Paroisse. Easter came and went and I’ve just checked, nobody bought it. It is not hollow — thirty-two-kilo-solid chunk. Even if you had a party of thirty people, each one of your guests would have to eat at least a kilo of dark chocolate. That is something for Guinness Book of Records or Ripley Believe It or Not Museum. Amazing, you say, but none of it really surprises me. I have already mentioned how extravagant Easter presents can get around here: miniature anecdotes represented on the inside of a regular size egg, or something as big as statue hiding inside the shell. The mood is contagious, yet to help consume conspicuously, we need an institution; otherwise, it ends up looking like we can’t…. Yes, ridiculous. Last weekend I got a bunny ten times my appetite. The best I could do was nibble on his ears.

Posted on March 30, 2015 by versaillesgossip, before and after Francis Ponge 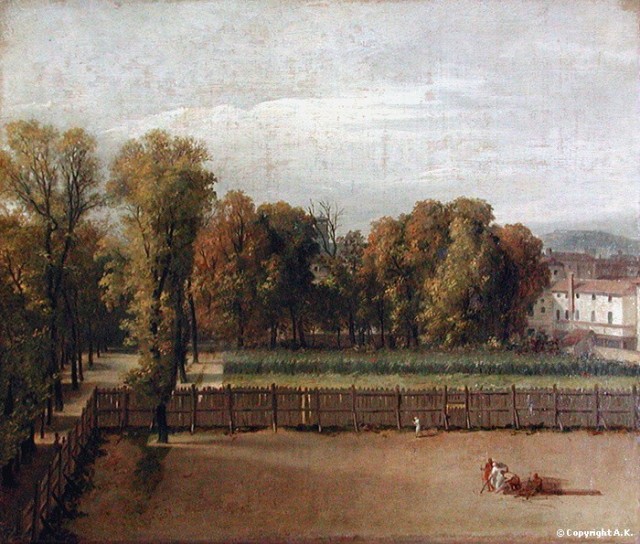 Perhaps I should remind my reader that in the days of the French Revolution, most of the parks were given away for pasture or raising crops and were often divided into lots; and though this anecdote seems to find its way into the painting, it cannot prevail over Jacques-Louis David’s situation. And his situation wasn’t enviable. After the execution of Robespierre, people associated with him followed suit; and in 1794 Jacques-Louis David painted this view of Luxembourg Garden as it presented itself out of his prison window, which gives us a very personal and at the same time brutally objective interpretation of his window into reality — not only composition, the very freedom of choice seems to be in question; and though there is little room there for pathetic  fallacy — any Romantic inclination being out of question, the emotional need is obvious — the painter ought to paint. This is why the framing ideas for this work of art are the absence of choice and the need to paint. In the context of so rigorously defined formalism, the discussion of any other formal attributes — the foreground, middle ground, landscape, city-scape, human figures; the fence, the alley; vertical, horizontal, diagonal lines, colors, shadows — any kind of discussion seems ridiculous. What is the meaning of the work? Why did he paint it? We see that consistently his brush was applied to canvass.

Posted on March 4, 2015 by versaillesgossip, before and after Francis Ponge 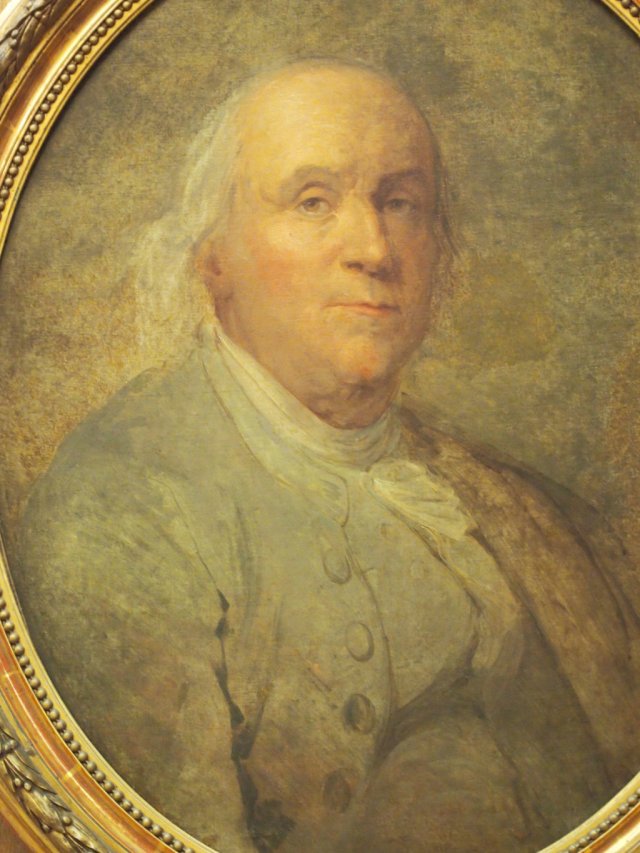 22 March 1778, it was cold and Benjamin Franklin was dressed in a brown velvet outfit but had neither a wig nor sword about him as he entered the Crystal Gallery where the court, ambassadors and all the twenty Americans that happened to be in residence in Paris had been waiting for his arrival. At noon he was introduced into the Royal Chamber, where Louis XVI, not dressed for the occasion — his outfit matched that of his guest in its simplicity and his hair was undone, gave the first American ambassador an audience. Then followed the presentation to the royal ministers and dinner; but before he left, Benjamin Franklin had payed His Majesty a complement, “If all the monarchs were guided by your principles, we wouldn’t need republics.” Here we would need to borrow some of that laughter from “Cheers.”

On the Inside of a Grand Piano

Posted on February 25, 2015 by versaillesgossip, before and after Francis Ponge 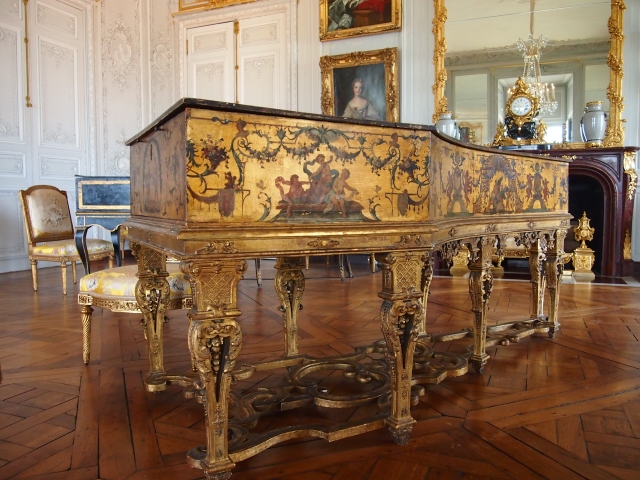 In the Renaissance Italy the insides of footlockers were often painted, and sometimes  those pictures were of nude women; perhaps this is why Titian’s Venus of Urbino has an open trunk in the background? Rumor had it that the XVII and XVIII century French grand pianos followed in the same tradition. How I wished to peek inside! Finally, my wish has been satisfied at Versailles Central Library; unfortunately, they showed me nothing as exciting as Angela del Moro. 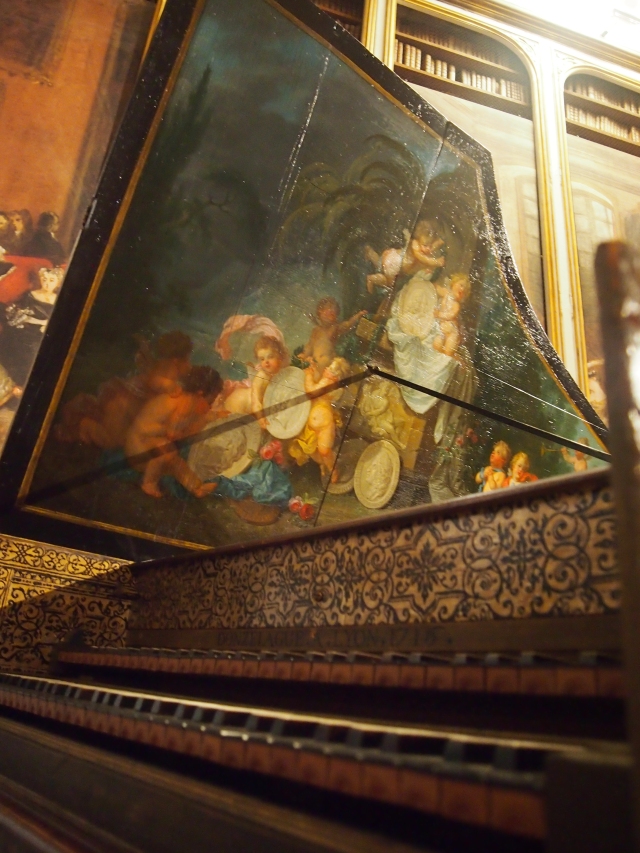